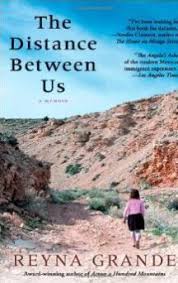 Rochester, NY: Writers & Books is excited to announce The Distance Between Us by Reyna Grande as the selection for the 2018 Rochester Reads program. Grande will be in residence doing readings, book signings and other appearances at local libraries, colleges and senior centers in Rochester and throughout the region March 28 through March 30, 2018.

In the 2012 memoir The Distance Between Us, Reyna Grande shares the complex experiences of her life, from her childhood in Mexico, through her illegal immigration to the US in pursuit of a better life, to her success as a student and author. This inspirational coming-of-age story follows Reyna and her family from the time her father went north alone—leaving two-year-old Reyna, her siblings, and their mother in Mexico. When her mother joined him two years later, the children were left living in poverty with a negligent grandmother in rural Mexico. When Reyna was 10, she and some of her family crossed the border. The story continues as Reyna and her siblings navigate the complexities of living as undocumented immigrants as well as the ravages of alcoholism—with Reyna ultimately being the first in her family to earn a college degree.

Remember that you can help support your community litereary center by purchasing your book directly from us! Copies of The Distance Between Us are available for purchase at Writers & Books. From September 26 to October 31 recieve 20% off your book purchase! Discount also offered to book clubs and bulk orders of 10 books or more through Writers & Books only. 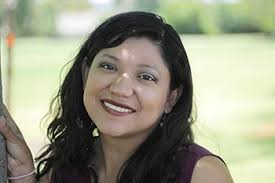 Reyna Grande is an award-winning memoirist and novelist. Her first novel, Across a Hundred Mountains (2006), won the American Book Award and the El Premio Aztlán Literary Prize. Her second novel, Dancing with Butterflies (2009), won the 2010 International Latino Book Award. Her 2012 memoir, The Distance Between Us, was a finalist for the National Book Critics Circle Awards for Autobiography. In 2015, Grande received the Luis Leal Award for Distinction in Chicano/Latino Literature.

After crossing the Mexico/US border and living as an undocumented immigrant, Reyna became the first in her family to graduate from college, and later she earned an MFA in Creative Writing. Reyna is a member of the Macondo Writers’ Workshop, which was founded by Sandra Cisneros, and is at work on a sequel to The Distance Between Us. She travels widely with her books and is also a popular motivational speaker.

PRAISE FOR THE DISTANCE BETWEEN US

“Reyna Grande is a fierce, smart, shimmering light of a writer with an important story to tell.”
–Cheryl Strayed, author of Wild: From Lost to Found on the Pacific Crest Trail

“I’ve been waiting for this book for decades. The American story of the new millennium is the story of the Latino immigrant, yet how often has the story been told by the immigrant herself? What makes Grande’s beautiful memoir all the more extraordinary is that, through this hero’s journey, she speaks for millions of immigrants whose voices have gone unheard.”
–Sandra Cisneros, author of The House on Mango Street

“A timely and a vivid example of how poverty and immigration can destroy a family.”
–The Daily Beast