After selling out all four nights at the 2017 Fringe, Award Winning Comedian Ike Avelli brings back 50 Shades of Gay to the 2018 KeyBank Rochester Fringe Festival on Wednesday, September 19th at 9pm; Thursday, September 20th at 9pm; Friday, September 21st at 10pm and Saturday, September 22nd at 8pm. Tickets are $15.00 at rochesterfringe.com, where more information is also available. Remaining tickets will be available at the door starting one hour before curtain.

Back in 2015, Ike Avelli decided to create an Adult Variety Show for Gay Pride in NYC, and “50 Shades of Gay” was born. The day before the show, Friday, June 26th, the Supreme Court Ruled; Same Sex Marriage A Right Nationwide! On the night of the show, Saturday June 27th, the theater in NYC was SOLD OUT and everyone was ready to celebrate. Since its debut, Ike has been selling out venues all over the U.S. and continues to do so three years later. Critics and audience members alike have been raving and Avelli continues to provide the best in Comedy, Music, Drag, and most importantly, audience participation with lots of giveaways! Get your tickets HERE. 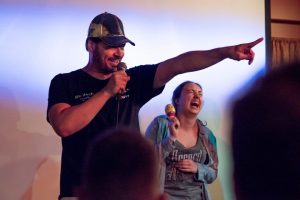 Along with Star Ike Avelli, the cast for the 2018 Rochester Fringe Festival will include: