The Writers & Books staff has a lot to be thankful for this Thanksgiving, but literature is definitely high on our list! A few of us looked back on our reads from 2015 and compiled a line-up of books that made our year a little more interesting! Enjoy!

This summer I read Wait Till Next Year, by Doris Kearns Goodwin, a memoir about growing up a baseball fan in New York City. Usually writing missives on, for instance, the Founding Fathers, this book is a much more personal story about her own love of baseball, and how the sport was (and still is) interwoven into her relationships with family members and friends. For any baseball fans out there, I highly recommend it. It doesn’t matter if you were never a NY Dodgers fan, which she staunchly was (trust me, as a Yankees fan, I know)… the book is a love story to the 50s and 60s, to a way of life, and to a national pastime. Nostalgia pulled heavily on me for this one – my dad grew up near NYC, also a big baseball fan, so many of her stories rang familiar.

I also read Church of Marvels, by Leslie Parry, which I fell in love with. The book surfaced during Writers & Books’ staff meetings on picking our upcoming Debut Novel Series authors, as Parry is a debut novelist, and while we didn’t end up choosing it, it was one of my favorites. Fun and intriguing, it reminded me of another favorite of mine, The Night Circus (Erin Morgenstern). Set in turn-of-the-century NYC, the city is as much a character as the players themselves, and I loved the beautiful descriptions that set the scene as much as I loved the mystery and action of the plot itself!

Lastly, this year the 3rd book in the Miss Peregrine series came out, which means I first re-read books one and two, and then dove into the third. If you’re not familiar, they are YA books entitled Miss Peregrine’s Home for Peculiar Children, Hollow City, and Library of Souls. The books are haunting… and a little scary, says my best friend… but I just found them spooky, in a perfect-for-Halloween-reading kind of way!

Between reading books for W&B, and my book club “Lit Chicks”, it was difficult to narrow it down to a couple books for this blog.   My all time favorite American classic novel is “To Kill a Mockingbird” by Harper Lee.   I like her writing style about a very important issue in our culture, and through a young protagonist’s viewpoint is quite thought provoking.  Atticus Finch is the white attorney who represents an African American man accused of raping a young white woman.  It takes place in Alabama in the 1930’s, and gives the reader the opportunity to explore the civil rights and racism in the south during this period of time.  The movie starring Gregory Peck is very well done, and worth watching, and it really captures the essence of the novel.

My other favorite book was “What Alice Forgot” by Liane Moriarty that my book club read, and we all enjoyed it!  Alice is a 39 year old woman who falls down in her exercise class, and hits her head. By doing so, she loses 10 years of her life – she thinks she’s 29, newly pregnant, and very much in love with her husband, while in reality she’s 39, has 3 children, and is in the process of a nasty divorce.  It’s a “time-travel” book, and it takes you for quite a ride.  Moriarty is an excellent writer, and it’s a very gripping novel.

The Cuckoo’s Calling was one of my favorite reads of 2015. It initially attracted me because it’s written by J.K. Rowling under the pen name Robert Galbraith. I am a crazy Harry Potter fan, and I had read The Casual Vacancy in the past, so I decided it was finally time to undertake this mystery novel. The story about the death of an internationally-known supermodel did not disappoint! The characters were rich and detailed, and the world Rowling created drew me in immediately. I am especially thankful for this book because it made me think and inspired me to make progress with my own novel!

I also re-read one of my favorite childhood books, Life Expectancy. I’m not sure why I chose this Dean Koontz novel at the age of twelve, but I loved it and read it multiple times throughout the years. I picked it up this year for the first time in a long time, and it was refreshing and interesting to read it as an adult. The dry sense of humor, complicated character relationships, and the thrilling unraveling of Jimmy Tock’s wild life will always resonate with me.

I am most often thankful for the books I read during my childhood and while growing up, and of course Harry Potter tops the list there. I have always been a fan of fantasy and other worldly books, such as the Hunger Games and the Hobbit. They have helped to grow my imagination and been so fun to read again over the years. It’s been wonderful to be able to come back to them and find them just as engaging as they always were. I am thankful for the way they have always been a part of my life, and how they have made reading such an important activity for me!

I’m thankful for Rebecca Solnit’s The Faraway Nearby. She frames the slow erasure of her mother’s mind by Alzheimers in discursive nesting-doll essays that take us through meditations on fairy tales, memory, ice, breath, Frankenstein, the shifting empathy of Che Guevara, and moths that drink the tears of sleeping birds. Solnit has such a precise but wandering mind that it’s a joy to follow her tangents that circumscribe how we use stories to locate ourselves in the world.

While choosing books for one of W&B’s community read programs, I picked up Billy Lynn’s Long Halftime Walk by Ben Fountain. This isn’t a book I would read. I have no real interest in war time books (The Things They Carried being an exception), but it was highly recommend by two coworkers whose book opinions I hold in high regard, so I took it home. 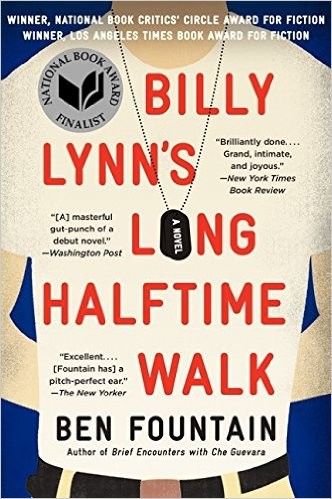 Meet Billy Lynn, a member of the Bravo Squad unit fighting in Iraq. After a particularly dangerous and deadly battle, Billy and seven other members of the squad return home for a government organized “Victory Tour” aimed at boosting public support of the war. Billy takes us on a walk; through his memories before he was deployed, to interactions with those he left behind during brief visits on the tour, building up to the squads arrival at the Dallas Cowboys (boo) game being played in their honor.

This is a book about having your entire view of the world put on its head. Though I can not empathize with what Billy is going through, it certainly made me think and analyze how I feel about certain issues; everything from the amount of money spent on NFL football teams for our entertainment to wars fought on other soil for our sake.

Thanks for the recommendations Karen & Dan.