The following was written by Chris Fanning, public relations associate at Writers & Books. 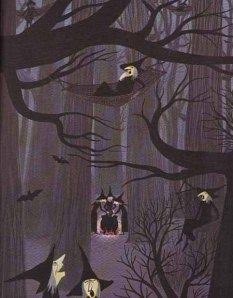 Halloween has always been my favorite holiday. When I was five years old, one of my favorite books to take out of the library was A Woggle of Witches by Adrienne Adams. The Geneva Public Library had two copies in their circulation and during one visit, I had a small meltdown because I believed that I needed both copies to come home with me. This resulted in a lot of tears over not understanding that there could be someone else out there that might want to read Woggle of Witches.

There is something special about this time of year. The colors, the change in temperature, the change in wardrobe; it all creeps up on us so fast. We go from wearing shorts at concerts in the summer sun to putting on pants and jackets to walk down the street for indoor get togethers.   For me, there is also a certain spark in the air in October.

The origin of Halloween goes back centuries when the Druids believed that during this time of the year, the veil between our world and the spirit world grew thin, making it possible for spirits to cross back and forth between places. There is a part of me that holds on to that idea. I mean, I’m not going out and laying gifts and food in graveyards so that the ghosts will leave me alone, but I certainly feel that the impossible is slightly more possible this time of year. Maybe it’s a side effect of the Fringe Festival.

After a year off, Writers & Books is once again holding a Halloween Party. The title is one that I have played around with for years and it tickles me that we went with it as our theme this year: Spiders & Crooks. It’ll be on Saturday October 24th from 7:00 – 10:00 PM. Writers & Books operates in the old Third Police Precinct. The building, built by Claude Bragdon sometime back in the very early 1900’s, is the perfect setting for a Halloween Party. 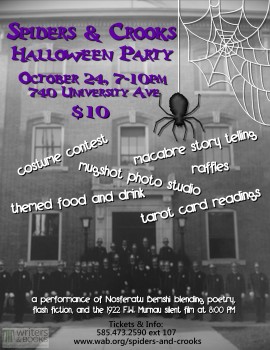 We’re going to turn the back atrium into a jail, have a tarot card reader on the second floor, and at 8:00 PM G.E. Schwartz is doing this crazy cool soundscape/flash fiction/theatrical performance of “Nosferatu Bemshi”. He and his partner performed the same show at Writers & Books several years ago as part of the First Niagara Rochester Fringe Festival and I have always wanted to bring it back for Halloween.

There’s a ton of other stuff we’re going to have going on that night and the staff and volunteers will have spent the entire day decorating the building. It’s going to be rad. I may even bring my copy of A Woggle of Witches to have in the lounge for you to look through. Just know that if I do, you can’t have it. That book and I have a lot of history together.