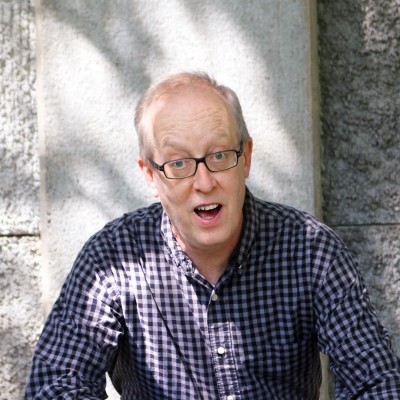 ROCHESTER, NY — Have you ever heard of Tom Willard?  The Rochester-based standup comedian plans to put on his first one-man show during the upcoming KeyBank Rochester Fringe Festival.

“TOM WILLARD:  A Comedian You’ve Never Heard Of” will take place 7 pm Wednesday, Sept. 12, 2018 at Writers & Books, 740 University Ave. in Rochester’s Neighborhood of the Arts.  Tickets are $10 and available through the Fringe website (rochesterfringe.com).

Willard started doing standup comedy in July 2016 at the age of 58.  Having gone deaf slowly while growing up, he talks in his act but also uses sign language.

“I do that for three reasons,” he explained.  “To make my act accessible to deaf people, to give hearing people a chance to see sign language up close, and so I can understand what I say.”

He talks about deaf-related issues such as hearing aids and lipreading (“I don’t even know if you’re talking to me or chewing gum”) but also shares his thoughts on pot policy, Jehovah’s Witnesses and the cat who pees on his things (“It’s not a medical issue, he’s just an asshole”).

Willard grew up in Westfield, N.J. and began to lose his hearing at age 8.  He moved to Rochester in 1980 to attend Rochester Institute of Technology, home of the National Technical Institute for the Deaf.  With support from NTID’s interpreters and notetakers, Willard earned an RIT photo degree in 1985.

Upon graduation, he founded Deaf Artists of America, a nonprofit that he ran for 10 years.  Since then, he has worked as a journalist in the deaf community for more than 25 years.  He decided to transition into standup comedy two years ago, he said, because “Frankly, I’m burned out.”

He’s seen some early success, beating 15 other comedians in Photo City’s “Who’s Got Next?” contest in Feb. 2017, performing at Toronto’s Yuk Yuk’s Comedy Club and New York City’s Dangerfield’s and Broadway Comedy Club, and making it to the quarterfinals of this year’s Toronto Comedy Brawl.

This fall, he will try out for next season’s “America’s Got Talent.”  He is represented by the same Los Angeles casting producer who represented last year’s winner — Darci Lynne, the teenage ventriloquist who will bring her show to Rochester’s Auditorium Theatre in December.

Willard is also a longtime advocate who is encouraging the comedy world to become more inclusive of people with hearing loss.  In early August, he was successful in obtaining real-time captioning for comedy shows at the Lucille Ball Comedy Festival in Jamestown, N.Y.

He acknowledges that he faces long odds in his goal of becoming a successful touring standup comedian, but he is steadfastly optimistic.