Deanne Quinn Miller was five years old when her father—William “Billy” Quinn—was murdered in the first minutes of the Attica Prison Riot, the only corrections officer to die at the hands of inmates. When she joined the Forgotten Victims of Attica, she began the process of bringing closure not only for herself but for the other victims’ families, the former prisoners she met, and all of those who perished on September 13, 1971—the day of the “retaking,” when New York State troopers and corrections officers at the Attica Correctional facility slaughtered twenty-nine rioting prisoners and ten hostages in a hail of gunfire. 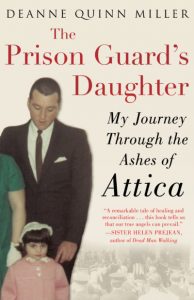 In The Prison Guard’s Daughter, Dee brings readers in on her lifelong mission for the truth and justice for the Attica survivors and the families of the men who lost their lives. Her  journey crossed racial and criminal justice divides: befriending infamous Attica prisoner Frank “Big Black” Smith, meeting Richard Clark and other inmates who tried to carry her father to safety after his beating, and learning what life was like for all of the people―prisoners and prison employees alike―inside Attica. As Miller lays bare the truth about her father’s death, the world inside Attica, and the state’s reckless raid and coverup, she conveys a narrative of compassionate humanity and a call for prison reform.

Deanne Quinn Miller is co-founder of the Forgotten Victims of Attica and the daughter of correctional officer William Quinn, the first casualty of the Attica Prison Riot. Since 2014, she has been the Program Coordinator for the Veterans Defense Program of the New York State Defenders Association, a program that provides support and legal aid to struggling veterans who become involved in the criminal justice system. Miller lives in Batavia, New York, and is married with two daughters.

Gary Craig is an investigative reporter with the Rochester Democrat and Chronicle. He is the author of Seven Million: A Cop, a Priest, a Soldier for the IRA, and the Still-Unsolved Rochester Brink’s Heist. Craig covered the resolution of the decades-long lawsuit filed by Attica inmates against the state. Since 2000, he has written extensively about Attica, reporting on the birth and work of the Forgotten Victims of Attica, and the efforts to open Attica records. Craig lives in Rochester, New York, and is married with two daughters.