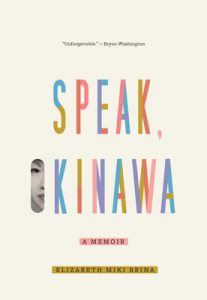 Elizabeth Miki Brina will be in conversation with Ali Meyers-Ohki

A searing, deeply candid memoir about a young woman’s journey to understanding her complicated parents—her mother an Okinawan war bride, her father a Vietnam veteran—and her own, fraught cultural heritage.

Elizabeth’s mother was working as a nightclub hostess on U.S.-occupied Okinawa when she met the American soldier who would become her husband. The language barrier and power imbalance that defined their early relationship followed them to the predominantly white, upstate New York suburb where they moved to raise their only daughter. There, even though she felt almost no connection to her mother’s distant home, she also felt out of place among her peers.

Decades later, Elizabeth comes to recognize the shame and self-loathing that haunt both her and her mother, and attempts a form of reconciliation, not only to come to terms with the embattled dynamics of her family but also to reckon with the injustices that reverberate throughout the history of Okinawa and its people.

“Speak, Okinawa is the rarest of books: as expansive as a history, propulsive as a novel, and intimate as a confession. It reads like a great consciousness springing to life. This book is more than an eye-popping debut, more than the introduction of a hugely talented writer. It is a time machine, a love letter, a revelation, a triumph. We are lucky to have it.”

—M.O. Walsh, author of My Sunshine Away and The Big Door Prize 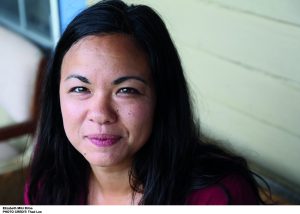 Elizabeth Miki Brina is the recipient of a Rona Jaffe Bread Loaf Scholarship and a New York State Summer Writers Institute Scholarship. Speak, Okinawa  is her debut memoir. She currently lives and teaches in New Orleans.

Ali Meyers-Ohki (she/her) is an emerging fiction writer based in Oakland, California. She is a queer cis woman with ancestors from Japan, France and the Eastern European Jewish diaspora. Her work centers young people and elders whose wisdom continually helps her to envision liberated futures. She is currently working on a young adult novel based on her grandparents’ experience in the Japanese American Internment Camps.