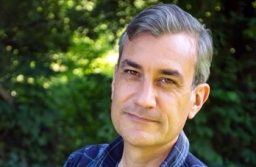 Matt Donovan will be in conversation with author and poet Peter Conners, Publisher and Executive Director of BOA Editions.

The Dug-Up Gun Museum confronts our country’s obsession with guns to explore America’s deep-seated political divisions and issues linked to violence, race, power, and privilege. Taking its title from an actual museum located in Wyoming, this collection of poems interrogates our country’s history of gun violence, asking questions about our fetishization of weapons, how mass shootings and the killing of unarmed civilians by police have become normalized, and the multitudinous ways in which firearms are ingrained in our country’s culture.

“In verse, prose poems, and lyric essays, Donovan holds up a mirror to America, so that we may, as Yusef Komunyakaa once wrote, ‘see and know the terror we are made of.’” — John Murillo

Matt Donovan is the author of two previous collections of poetry, Rapture & the Big Bam (Tupelo Press, 2017) and Vellum (Mariner, 2007), and a book of lyric essays, A Cloud of Unusual Size and Shape: Meditations on Ruin and Redemption (Trinity University Press, 2016). His work has been published in numerous literary journals, including AGNI, American Poetry Review, The Believer, Gettysburg Review, Kenyon Review, Poetry, Seneca Review, Threepenny Review, and Virginia Quarterly Review. Donovan is the recipient of a Whiting Award, a Rome Prize in Literature, a Pushcart Prize, the Levis Reading Prize, and an NEA Fellowship in Literature. He serves as Director of the Boutelle-Day Poetry Center at Smith College. 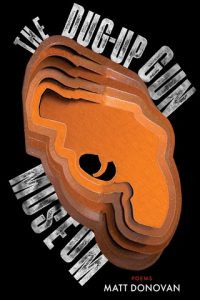 The Dug-Up Gun Museum
Rapture & the Big Bam
Vellum
A Cloud of Unusual Size and Shape: Meditations on Ruin and Redemption