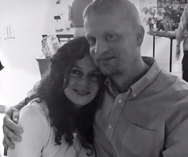 Hear poets Denise Abercrombie and Jonathan Andersen read from their published work via Zoom, then listen in as they join Executive Director Alison Meyers in conversation about their craft, the role of poetry as an agent for change, their work as teachers, and living together on a small farm in rural Connecticut.

Denise  Abercrombie’s work has appeared in Minnesota Review, Fireweed, Connecticut Review, Phoebe: Journal of Feminist Scholarship, Theory and Aesthetics, The Lumberyard: A Radio Magazine, Struggle, Writing on the Edge, and elsewhere. She has read her work widely, including as a featured poet at the 49th International Poetry Festival in Belgrade (2012) and Smederevo’s Poetry Autumn (2014). The director of Fine Arts at E.O. Smith High School in Storrs, CT, Denise occasionally performs and directs original and existing works with Stage Left Ensemble in small theaters, cafes, and prisons. She helps coordinate Curbstone Foundation’s Poetry in the Julia de Burgos Park series in Willimantic, CT.

Jonathan Andersen is the author of Augur (Red Dragonfly Press, 2018), about which the poet James Scully writes, “His poetry takes on the moral and social realities of our current era, speaking through them, in anger and with care, the whole spectrum of human emotions, not the least of which is exuberance.” Jon’s other books include The Burden Note, (Meridian Prize, 2014), an English/ Serbo-Croatian chapbook, and Stomp and Sing (Curbstone Press/Northwestern University Press, 2005). The editor of the anthology Seeds of Fire: Contemporary Poetry from the Other U.S.A. (Smokestack Books, 2008), Jon has been a featured reader throughout the eastern United States, the United Kingdom, and Serbia. His poems have appeared in print and online in such places as Blue Collar Review, The Chiron Review, Connecticut Review, Counterpunch, Exposition Review, Freshwater, HeART, Here, North American Review, The Progressive, and Rattle. For 12 years he was a high school English and special education teacher, and has been a professor of English at Quinebaug Valley Community College in CT since 2008.