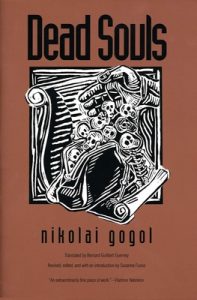 For years I avoided Nikolai Gogol’s 1842 novel Dead Souls because, knowing nothing but the title, I assumed it would be depressing and grim. To Flannery O’Connor, though, Gogol was “necessary along with the light.” Why? Nabokov called him “the strangest prose-poet Russia ever produced.”  Finally I dipped in and was astonished to find something deeply wacky here. It is a novel full of wonder and observation, open to the jarring, the silly, and the quiet. There are problems. I also learned Gogol was from Ukraine.

Recommended edition: I recommend Bernard Guilbert Guerney’s translation, not because I know anything about translating Russian into English, but because Nabokov recommended it. A more recent translation is by Richard Pevear and Larissa Volokhonsky.

Note that some editions include a “Part Two” or “Volume Two.”  I suggest ignoring that. “Part One” is the complete Dead Souls that Gogol published in 1842. He struggled with a sequel but never finished it, and any version you come across is going to have been pulled together by an editor from Gogol’s incomplete notes. For me, plowing through “Volume Two” is like forcing myself to listen to three hours of outtakes from my least favorite Led Zeppelin album. 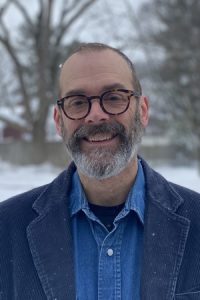 James Whorton Jr. is a former Mississippian now living in Rochester, NY.  He has published three novels: Approximately Heaven, described by The New York Times as “an alcoholic picaresque adventure of hangovers, hotel rooms, suspicious piles of cash and Johnny Rivers tunes”; Frankland, “a kinder, gentler Confederacy of Dunces,” according to Ron Charles; and Angela Sloan, called a “beautiful, deeply original novel” by Joe Weisberg, writer and creator of “The Americans.”   Whorton’s short stories and essays have appeared in The Oxford American, The Southern Review, Mississippi Review, The Washington Post, and Sewanee Review.  He teaches at SUNY Brockport.

This virtual event with James Whorton, Jr. is streamed via Zoom.