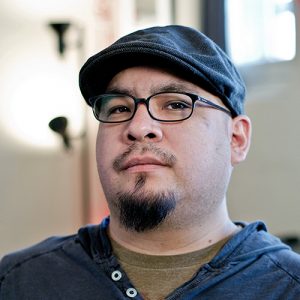 Join us for a stellar evening with poet Santee Frazier, author of the poetry collections Aurum, praised by Terrance Hayes as “a trove of sensations,” and Dark Thirty, called  “visceral, immediate, and memorable” by Arthur Sze. Mr. Frazier will read new and published poems, give a talk on literature and culture, then be joined in conversation with Angelique Stevens, Monroe Community College Professor and award-winning essayist.

Santee Frazier’s honors include a 2009 Lannan Residency Fellowship and the 2001 Truman Capote Scholarship from the Institute of American Indian Arts Creative Writing Program.  A citizen of the Cherokee Nation of Oklahoma, his poetry collections offer non-romanticized, realistic portraits of great beauty, and a rare look at the truths of survival for Native peoples in today’s society. Mr. Frazier directs the Institute of American Indian Arts Low Residency MFA program.

“In language infused with the attitude of blues—never nostalgic or self-pitying—Frazier explores the harsh lives of people living at the margins with a measure of tenderness that underscores their dignity. The poems handle tough subjects gracefully, moving thematically from issues of sexual exploitation and violence in everyday domestic life to a kind of wonder at the redemptive possibilities of the human spirit rising out of chaos.” —Former United States Poet Laureate Natasha Trethewey

Angelique Stevens, Haudenosaunee, lives in Upstate New York where she teaches creative writing, literature of genocide, and race literatures. Her nonfiction can be found in LitHub, The New England Review, The Chattahoochee Review, and a number of anthologies. Her essay “Ghost Bread” won the Prism International Creative Nonfiction Contest; she won the grand prize for the Solas Award in 2019; and her essay “Remember the Earth” was published in Booth 13: Nonfiction Prize Issue, a Special Issue selected as a Notable in The Best American Essays 2020. A member of the Board of Directors of Water for South Sudan, she is writing a memoir about her experiences growing up in New York State.