The following blog was written by staff member Tate DeCaro.

Our Writers & Books Young Professionals book club, the Book Thieves, is currently in the midst of reading Neverwhere, by Neil Gaiman, our 5th out of 6 books of the year. And I recently found out that the book is actually a companion novelization of a BBC television series from the late 90’s, also by Neil Gaiman. I watched a clip of the show and it was certainly very BBC 1990’s – i.e., low budget. (I know this because I traveled around England in 1997, and got hooked on a couple of very poor quality but completely addictive BBC shows while there!) Still, I’m interested enough to see the origins of the story that I may have to seek out the series and watch some of it online, if possible. In addition, in 2013 Benedict Cumberbatch and James McAvoy, amongst others, did a BBC Radio six-part adaptation of the novel, which I’d love to hear. 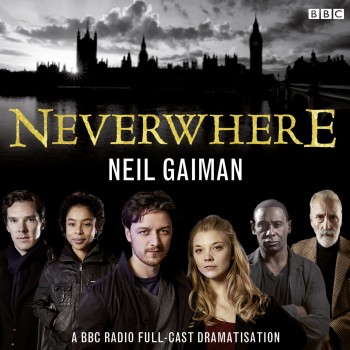 For now, though, I’m listening to the Audible version, which is narrated by the author, a hauntingly good reader. I’ve read Neverwhere before many years ago, but don’t recall being quite as sucked in as while listening to Gaiman voice his own characters. Not all writers can also successfully weave the narrative in spoken word, but Gaiman is clearly an expert story-teller, on and off the page. (As a side note, this all makes me feel incredibly jealous of all the kids at Bard College, my alma mater, who get to attend his classes! He joined the Bard faculty in 2014 as a Professor in the Divisions of the Arts and of Languages and Literature.) Production-value wise I’m also enjoying the fact that at certain moments in the text when the main character, Richard Mayhew, is dreaming, they incorporate an echo-y quality to Gaiman’s voice that makes it sound like he’s a in a deep tunnel… which is perfectly appropriate, since the majority of the action takes place underneath London, in “London Below,” a magical and bizarre world that exists under the streets of “London Above.” This is sort of a more scary and dangerous version of Alice in Wonderland – a regular, basically boring person from the “ordinary” world falls down the rabbit hole, or, more likely in this case, the manhole, and enters into a fantastical world where nothing makes sense and everyone seems to know what’s going on but that poor, tiresomely normal person from above.

This is the Book Thieves’ YA read of the year, and I’m looking forward to hearing everyone’s thoughts on it next month. If you’re interested in joining us, we meet at 7pm on September 3 at Writers & Books. Thieves bring themed food and drink to the meetings… so I’m anticipating some British delicacies that hopefully have more to do with “London Above,” because “London Below” food seems to mostly mean roasted cat, and cottage cheese and lettuce sandwiches.

Next up for the Book Thieves is The Art of Racing in the Rain, by Garth Stein, which we’ll be reading in two parts and meeting on November 5 & December 3 for. For more information find us on Facebook (Book Thieves, social group).