Place Projectors creates cinematic sculptures made of light, shadow, steel and glass that are inspired by Rochester’s unique position in the story of media culture. Film and photography capture a moment in time and place so it can be mobile. Lenses open micro and macro worlds as light passes through them and into our eyes. Place Projectors re-imagines inventions and materials (pioneered by Kodak and Bausch + Lomb) that allow us to see beyond our current time and place by using them to create site and time specific interactions. Each sculpture, or ‘projector’, is connected to an event or object that is rooted in its physical location. Activating each ‘projector’ is an invitation to unearth where you stand in a city that changed how we see and perceive.

Our Mission is to create a deliberate ‘spectacle’ to bring attention to the importance of recording shared histories and investing in the future of young creatives that will remain and grow in Rochester, NY. We work with local non-profits to source stories from the community and create jobs for young artists. The content of each projection is sourced through the Rochester Historical Society and local nonprofits dedicated to preserving Rochester’s history. 25% of the total cost of each sculpture goes to professional development workshops for art assistants and funding for nonprofits that partner with us. 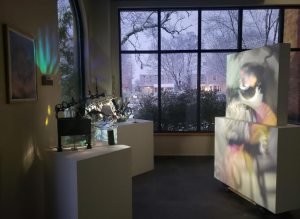 Annalisa Barron (b. 1987) is an interdisciplinary artist based in New York City and Rochester, NY. She graduated from Penn State University with a BFA in Painting and Drawing in 2013 and with an MFA in Sculpture from the Pratt Institute in 2017. Her work has been exhibited at Cooper Union, University of Rochester, Southern Oregon University, BunkerPROJECTS Gallery (Pittsburgh, PA), U.S. Embassy in Nicaragua, NO/GLOSS film festival (UK), and the Anthology Film Archives (NYC). Her most recent film, The Kingdom of Back (2017), was featured in GRRL HAUS Cinema’s 2018 European tour. She served as a panelist for the 2020 NYFA Craft and Sculpture Fellowships and is a recipient of NYSCA’s 2021 DEC Individual Artist Grant. She has received support from the New York Foundation for the Arts, the AAUW, the New York State Inspire Grant, Penn State University and the Simmons-Jansma Project Renew Grant.  Currently, Annalisa teaches in the College of Art and Design at the Rochester Institute of Technology.

What is a sense of place? Is it a feeling? A smell? A memory?

The boy’s poem began in a bottle of blue mouthwash, ended in the aquamarine deep end of a pool. We held hands, opened our eyes, looked at each other underwater.

A woman starred in a play, orbited by a Greek chorus rustling plastic bags around her, rustling & rustling them like hissing instruments, like wind through fake leaves.

In a maroon velvet room, a young man planted an avocado forest inside a spotlight. Watered it with strange rain from clouded vowels, cupped in his hands.

My favorite memory of Writers & Books is about early mornings. For years, I had a morning ritual. In order to force the night owl out of my system, I would walk to the Corner Store to get the morning paper. My favorite part of the short walk in my beloved Neighborhood of the Arts, occurred when I was directly across from 740 University Avenue. Like clockwork, Joe Flaherty would be there taking out the trash from the night before. We would greet each other with a wave of the hand, but the real magic occurred not just with our connection, but just above the iconic brick building. There, the pigeons would be flying in formation, shimmering in the early morning light. I always thought they were sweeping away from the rooftop the still vibrant words from the night before–scattering them into the air where they would create further formations.

In 2015, I took a standup comedy class Writers & Books. I signed up for the class because I had briefly dated a girl earlier that summer who didn’t think I was funny. I was pretty sure I was funny, but I wanted to prove it to myself. After one decent 5 minute set, I was satisfied knowing I could fulfill my alternate life dream of moving to NYC and writing for a late night show. Not that I’ve done anything in that direction, just believing it was possible was enough for me.

The class was held in one of the upstairs rooms. The seats were on risers, I believe, and the stage had a mic, with a spotlight on the mic. A bad set was really quiet, almost like being alone in a room while cursing myself quietly into a mic for not preparing better. For a good set, doing stand-up was like putting on a character. I’m not big into acting, but telling jokes on-stage like that was me playing a part. My go to character was basically a rip-off of Stephen Merchant’s Hello Ladies character. If you’re not familiar with Stephen Merchant, you’re almost certainly familiar with his work as co-creator of The Office. Writing jokes took a few hours of work, but when I had a plan and a few jokes, I hardly got nervous and felt quite at ease on stage.

One of my better jokes was a bit crude, but it went over pretty well. It was about going to the dentist, and it fit well with my character’s weird energy. I had worked hard on that set during the week, and I was glad that at least a few of the jokes landed. I liked getting laughs, but it wasn’t a big enough motivator to continue working hard, which meant a bad set the following week and basically the end of my career in comedy. I was satisfied.

A few weeks after the class ended, I went to see some of my classmates perform at an open mic night. One of the ladies from the class retold my dentist joke with a couple of changes to make it her own. A joke I wrote, good enough that someone tried it onstage in public! I was so proud.

I participated in National Novel Writing Month, also known as NaNoWriMo, for three years – in 2012, 2013, and 2014. I churned out three manuscripts that will likely never see the light of day beyond these little anecdotal memories of creating them. In 2013, in the middle of my NaNoWriMo offering “The Bride of Death,” I encountered Writers and Books for the first time. That period of my life was a lonely one for me; I had moved to Rochester with my partner two years prior, was in the middle of grad school, and spent most of my time generally in my head making music and writing. But I came out of my shell and connected online with the Rochester NaNoWriMo folks, and they held a “Write In” event at Writers and Books. We gathered in that special space surrounded by beautiful books, many by local authors, each with our own laptop and manuscript in the making. Little worlds were spilling out of our excited fingers. I remember being so glad I was brave enough to make connections and actually leave my house to write and be a part of Rochester’s NaNoWriMo community at Writers and Books. I felt like I was a part of something larger than the little world I was crafting – larger than the boundaries of my imagination, even. It was leaning into a warm feeling of acceptance, and the joy of momentary community being built around me.

After we spent some time furiously getting words and phrases down to keep up with our word counts, each of us hastily mired in our own little universes, we read excerpts for each other. For those moments, our words were filling those shelves, sticking to the walls, being witnessed by others. My story that year was about a witch who would murder citizens of a financially doomed mining town and sacrifice the bodies to a spirit under the mines to keep the town booming. I vaguely remember that the passage I chose to share was one I had just finished, and it involved a character discovering a dead girl in a river, with her blonde hair bobbing up and down resembling that of a dismembered doll. However dark or edgy or deep I felt I was being at the time, I was accepted without question. I was home there, among those listening ears. It’s a memory I have cherished all these years, especially now in a time when gathering indoors, huddled around tables to listen to words being read, is honestly a lost dream. Thank you, Writers and Books, for being a place to house writers and readers and wanderers and souls searching for home.

In the temporal world, a “place” often refers to a physical space that one can inhabit. But, I find out that that’s not always the case, one fateful summer during a Writer’s and Books workshop.

I’ve just returned home to Rochester from Chicago and I am not happy about any of it. I moved to Chicago almost two years prior to enroll in the famed Second City Training Center’s Comedy Writing Program. After the yearlong program is complete and my certificate earned, I try for many desperate months to find a job, to no avail. Jobless and broke, I reluctantly come home. My sister–up to then my right hand man and closest confidante—moved to Chicago with me and opts to stay behind. I’m returning home defeated: no job, no money, and no sister. I’m so disgusted that nothing worked out the way I wanted it to and so betrayed by the craft of writing that I’m most positive I’ll never do it again.

A few months pass when, on a lark, I sign up for a short film screenwriting class at Writer’s and Books. Screenwriting is something new, an avenue of writing I’ve never explored, and I use this status as a beginner to guard me from any feelings of inadequacy that plague me from past failures. I quickly feel at peace in the screenwriting class because the instructor always has the blinds drawn so he can show us films clips in the dark. My life is on autopilot at this point, so the dim lighting and the eerie comfort of the classroom matches the mute status of my writing dreams and the aimless fog of my daily movements.

On the last night of the class, the instructor holds me after class and implores me to keep working on the craft. He enjoys my script, champions my writing, and emphasizes my talent. “You are a true writer. And the world needs good writers; there are so many bad ones.” The gravity of his voice buoys me back up to the surface. I see daylight again.

Five years and many workshops later, one of my short plays debuts in Rochester’s Fringe Fest. It is part of a street theatre experience, held on a street outside of Writers and Books. The street theatre is literally yards away from the indoor theatre where I completed my first short film screenplay; but the atmosphere could not be more different. It happens on a beautiful fall day, full of outdoor warmth and bright sunshine. Friends and family gather to watch; they assemble on the grass having breezy, spirited chats.

As I observe this moment, I embrace the lesson that The Location is not the same as The Place. The right place to be when I’m writing is not Chicago and it is not Rochester. The Place is that space I find within myself where I hear nothing, see nothing, worry about nothing. The space within myself where a good writing challenge sends my fingertips burning to commit words to a page, organized in a way only I can organize them. And that space is never dark; it is always illuminated by creative sparks.

The Write Place is The Right Place.