Rachel Hall is the author of Heirlooms (BkMk Press), which was selected by Marge Piercy for the G.S. Sharat Chandra Book Prize. She teaches at the State University of New York in Geneseo, where she holds two Chancellor’s Awards for Excellence—one in teaching and one for her creative work. 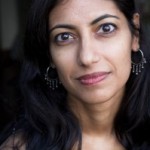 Sejal Shah’s stories, essays, and interviews have appeared widely in places such as Brevity, The Huffington Post, the Kenyon Review, and AWP’s The Writer’s Chronicle. She teaches at Writers & Books and the University of Rochester, and works as a freelance writer, editor, and writing mentor.

Sejal Shah: What images, ideas, or questions inspired or drove the writing of Heirlooms?

Rachel Hall: I grew up looking at family photo albums and
listening to family stories. I’m lucky that my mother is an excellent
storyteller, as were her adoptive parents, my grandparents. I loved their stories about the war in France, loved hearing them repeated, and in particular the way a new detail might emerge.

At some point I began wondering what was left out or smoothed over or forgotten altogether. I also had questions that couldn’t be answered. We knew so little about my mother’s biological mother, for instance, because she died at twenty-seven, just as the Germans were invading France. In each photo we have of her, she looks very different. My grandmother didn’t talk about her much and when nudged would only say the same few things: she was an excellent seamstress; she was jealous; she could be very erce. In Heirlooms, I was interested in exploring memory, erasure, and loss.

SS: These stories are based in part on family stories. How did you decide to write the book as stories and not creative non fiction essays? And having chosen fiction, what differentiates linked stories from a novel?

RH: Heirlooms is inspired by my family stories and many of the events in the book happened in real life. For instance, the situation in “La Poussette,” in which the neighbor woman refuses to share her bounty, is something that really happened. I don’t know if that woman denounced my family, but someone did and my mother and grandparents had to ee the farm in haste. In my research, I learned that there were two and half million letters of denunciation sent to French prefectures during the Occupation. Many were motivated by jealousy and possessiveness, rather than an affinity with the Vichy racial laws.

Fiction allows me to wed what happened with my research and try to understand why someone might act as they did. I can’t know what the neighbor woman thought or felt, but fiction allows me to step into the shoes of these characters, to invent and imagine and suppose. I think fiction brings the reader closer to the events than creative nonfiction can. I guess, too, I wanted to stay out of the stories in a way I didn’t think CNF would allow. And of course, there are stories in the collection, which are more invented than others, which wouldn’t have been possible with CNF. In “A Handbook of American Idiom,” for instance, I allow the Latours to get rich from the shampoo Jean brews in his basement. The real life situation made for less compelling—and believable!— fiction.

As far as stories versus novel, there are several answers. I love that linked stories allow me to slip into a number of different character’s perspectives and points-of-view. I also appreciate that with stories, I can make leaps in time between events. Remember, too, that I was inspired by family photo albums, and I think the story form is true to that inspiration, providing glimpses into lives from different angles and at different times. But also, honestly, it was less daunting for me to think in terms of stories rather than a novel. As soon as I wrote the second story, I thought of this project as a linked story collection—but my agent called it a novel. It does move chronologically, too, like a novel.

SS: How important was research in the writing of this book and how did you research what you needed to know or learn?

RH: My grandmother was a painter, and the stories she told me were like her art—impressionistic, vivid, colorful. From her, I got a sense of how she felt during the war but I didn’t always get information about how things worked. For instance, she always told us that as soon as she heard that Jews were to register with the City Hall, she took my mother—a toddler at the time—and fled for the Unoccupied Zone. I needed to research to nd out what sorts of papers were necessary for her to do this. I had to consult maps a lot, too. I’m fortunate that my mother, who was a child at the time of the war, has since studied France during the Occupation and could recommend books and supply information too. She’s also fluent in French and helped translate letters and papers.

I found journals from the war years to be especially helpful. Two in particular that were critical for this project were The Journal of Hélène Berr and Agnès Humbert’s Résistance: A Woman’s Journal of Struggle and De ance in Occupied France, in which Humbert writes that she began her Resistance work after Paris fell to the Germans out of a need to speak with like-minded people. This was an explanation for risking one’s life, as she and others did, that I found utterly convincing. I’m not a big risk-taker, but I’d have a hard time not being able to speak my mind. Imagine if we couldn’t commiserate with friends about Trump, for instance.