On May 15, 2015 Writers & Books Development Associate Tate DeCaro participated in a Boy Scouts of America fundraiser, “21 Stories for Scouts,” and 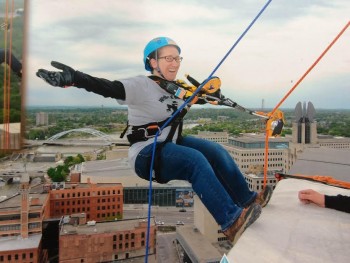 rappelled down the side of the First Federal Plaza building in downtown Rochester.

Tate raised over $1,000 for the local chapter of the BSA in order to participate, all of which went to support urban scouting programs, including the 40 after-school programs run in Rochester schools, and an opportunity to attend three summer camps. Learn more here:  21 Stories for Scouts

A native Rochesterian, Tate has also lived in the Hudson Valley (Bard College for her B.A. in Psychology), Canada, Italy, and Ireland. Upon returning home in 2009, Tate completed a Master’s Degree at R.I.T. In 2011, she served as Interim Development Director at Writers & Books for 3 months and now works as the permanent Development Associate.

Tate was “roped” into the BSA fundraiser (pun intended!) by a friend who works there, and had a great time, despite shaking arms and legs!